9th July 2021 INDIGO WILDE AND THE CREATURES AT JELLYBEAN CRESCENT... Enter the colourful world of Indigo Wilde and the magical creatures who live at Jellybean Crescent. When a highly dangerous new arrival goes missing, the race is on to catch it before disaster strikes ... Discovered in the Unknown Wilderness when she was just a baby, Indigo Wilde was adopted by World-Famous Explorers, Philomena and Bertram, who are always off adventuring. Home for Indigo and her little brot
6 views0 comments

The Day I Fell Into A Fairytale...

01st April 2021 THE DAY I FELL INTO A FAIRYTALE 🦄... Enter a world of wonder with the bestselling children’s classic from actor, comedian and author, Ben Miller. Lana loves stories. Especially the ones she and her brother, Harrison, share in their make-believe games. But when Harrison decides he’s too grown-up to play with Lana she finds herself feeling lonely. Until something magical happens . . . Hidden in the strange new supermarket in town, Lana discovers a portal to a f
24 views0 comments

A CHRISTMAS GIFT FROM BOB...

10th December 2020 A CHRISTMAS GIFT FROM BOB 🐈... Based on the international best-selling books and the ‘purrfect’ Christmas sequel to the international hit film A STREET CAT NAMED BOB – follow James and his best friend, Bob on their new journey together. From the day James Bowen rescued a street cat abandoned in the hallway of his sheltered accommodation, they began a friendship which has transformed both their lives and touched millions around the world. In A CHRISTMAS GIF
19 views0 comments

Witch Brew Is Your Poison...

20th October 2020 Our 🎃 HALLOWEEN SHAKES 🎃 are simply to die for... The 'GOO'SEBUMPS shake is sure to have the hairs on arms standing on end! A Cadbury Goo Head Shake that has been smothered with Whipped Scream, Gummy Zombie Brains whilst also dripping in Ghostly Blue Bubblegum Ectoplasm Sauce...is sure to send shivers down your spine! If you prefer something else to get your teeth into, why not try our DRA'COLA' Coke Cola Float Halloween Shake, a very scary concoction of C
41 views0 comments

3rd March 2020 From #1 New York Times bestselling author Cassandra Clare comes the first novel in a brand new trilogy where evil hides in plain sight and love cuts deeper than any blade. Chain of Gold is a Shadowhunters novel. Cordelia Carstairs is a Shadowhunter, a warrior trained since childhood to battle demons. When her father is accused of a terrible crime, she and her brother travel to Edwardian London in the hope of preventing the family’s ruin. Cordelia’s mother wants
24 views0 comments

17th February 2020 Members of the mysterious and spooky Addams family -- Gomez, Morticia, Pugsley, Wednesday, Uncle Fester and Grandma -- are readily preparing for a visit from their even creepier relatives. But trouble soon arises when shady TV personality Margaux Needler realizes that the Addams' eerie hilltop mansion is standing in the way of her dream to sell all the houses in the neighborhood. To celebrate the release on DVD and Blue Ray of the Addams Family on March the
16 views0 comments

30th Jan 2020 Cast a spell on that special someone with any of our Valentine special LOVE POTIONS! There are 3 different combinations to choose from so you'll be sure to find the right one to win the heart of that special someone this Valentines. #promotion #milkshakes #valentines #offers #love
14 views0 comments

6th January 2020 Start the year with a 💥BANG💥 when you purchase any of our TOP TEN, FAB FIVE or MOOVIE named shakes. Our JANUARY SHAKEDOWN event starts on Monday 6th January and ends on Friday 31st January. With savings of around 15% on all these named shakes during the event you're definitely getting 💥BANG FOR YOUR BUCK💥 #promotion #milkshakes #newyear #offers
11 views0 comments

11th December 2019 Ever wished for something for Christmas and you didn't get it...horrible isn't it, well never fear, that won't happen this Christmas with our range of special Christmas Milkshakes...Milkshakes you've always wished for. Our 'CHOCA LATTE' shake is choca full of wonderful wintery delights! A Cadbury Choca Latte shake covered in fresh drifts of whiter than white Whipped Cream and topped with gooey Toffee Sauce and Crunchy festive chopped nuts this is one festiv
12 views0 comments

10th December 2019 The wonderful 'A Cinderella Story: Christmas Wish' is OUT NOW! 🎅⛄️ To celebrate its release we are giving you the chance to WIN a Big Christmas Toy Bundle! Click HERE to enter. Not only that but we have created our very own "Christmas Wish Milkshake", a festive combination of Quality Street Mint Matchmakers, Whipped Cream, Skittles and Sparkly Sprinkles 😋 Good luck everyone! #promotion #win #milkshakes #smoothies #froyo #flurry #acinderellastory #sblended
9 views0 comments

7th December 2019 We've finally arrived...we've made it...we're on Broadway! O.K,O.K, so its Broadway Hammersmith not the actual Broadway but hey, it's still very cool 😆 Christmas came early at the weekend for those lucky people who nabbed a free milkshakes and a 20% discount on everything in celebration of the grand opening of our brand new kiosk at the wonderful Broadway Hammersmith Shopping Centre in London. If your in or around Hammersmith why not drop by and say hello a
14 views0 comments

The Places I've Cried In Public...

14th October 2019 Amelie loved Reese. And she thought he loved her. But she’s starting to realise love isn’t supposed to hurt like this. So now she’s retracing their story and untangling what happened by revisiting all the places he made her cry. Because if she works out what went wrong, perhaps she can finally learn to get over him. For your chance to WIN 1 of 3 signed copies of the book and a Self-Love Spa Day for two enter at https://www.bookcomps.com/selflove/ or click th
13 views0 comments 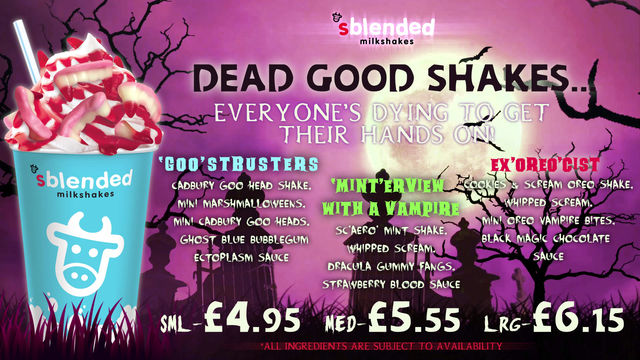 Dead good shakes, everyone's dying to get their hands on...

16th October 2019 Everyone's dying to get their hands on our DEAD GOOD SHAKES this Halloween, so don't miss out, get down to your nearest sblended before they've all been devoured!!! Who ya gunna call...'GOO'STBUSTERS! You'll be calling our Goostbusters Halloween shake the most frightfully good shake you've ever tasted...a Cadbury Goo Head Shake that has been smothered with Mini Marshmalloween's & Mini Cadbury Goo Heads whilst also dripping in Ghostly Blue Bubblegum Ectoplasm
17 views0 comments

The Girl With Space In Her Heart...

12th September 2019 Looking for a book for your kids this Autumn? Look no further. Mabel Mynt knows a lot about space. . .like how we feel connected to the stars because we are all made of stardust. And that sometimes the perfect place for her sister Terrible Topaz, would be a black hole. But Mabel doesn’t know how to fill the space in her heart that Dad left when he walked out. . . And so she sets out on a mission of discovery. . . A heart-warming tale book that will make yo
15 views0 comments

The Garden Of Lost Secrets...

29th May 2019 October, 1916. Clara has been sent to stay with her aunt and uncle while England is at war. But when she reaches their cottage on an enormous country estate, Clara is plunged into a tangle of secrets… A dark, locked room, a scheming thief, and a mysterious boy who only appears at night. Clara has a secret of her own too – a terrible one about her brother, fighting in the war. And as the secrets turn to danger, Clara must find the courage to save herself, and tho
62 views0 comments

15th April 2019 Introducing our new "u'r sblended" loyalty card, a new and refreshing take on loyalty rewards. Pick up a card from any participating Sblended store and register it here. Then, simply scan it every time you spend in-store and you will earn points. For every full £1 you spend, you’ll receive 10 points. For example £3.30 would result in 30 points, however £4.00 would equal 40 points. The more you spend, the more you are rewarded. Each 1 point is worth £0.01 to sp
24 views0 comments

15th April 2019 Introducing our brand new sblended gift card...for that sblended someone! Simply pick up a card from any participating sblended store,  hand it to one of our sblended shakers who will load it up with your desired amount which can be anything from £5 - £100. Once loaded your ready to give it to that sblended someone but don't forget to write who the gift is from on the reverse of the gift card carrier just so they know how sblended you are too. Full terms and c
11 views1 comment

1st April 2019 ​​We've got Crackin' Easter shakes in-store for you this Easter! If a Golden Goose were too ever lay a golden shake, it would be this Golden Goose shake comprising of Galaxy Caramel, Whipped Cream, Galaxy Golden Eggs and lashings of Golden Salted Caramel Sauce. You'll be hopping with delight when you try our second offering; the Bugs Yummy...a delicious combination of Maltesers, Whipped Cream, Butterscotch Sauce and Malteaster Bunny hopping around on top! ​ It'
5 views0 comments

1st January 2019 It's January and that can mean only one thing on the High Street...January sales! We're not having a sale though, we're having a full on shakedown on all of our named shakes. Yes, you heard correct...for the first time we are slashing our standard pricing on all our Top Ten, Moovie & Fab Five named shakes! With savings up to 15% off the recommended retail price you need to purchase now as these prices won't hang around for long. So if you're yet to experience
32 views0 comments
1
2